Lanikai Beach, Hawaii The U.S. Navy's EOD team, Detachment Mid-Pacific, safely set off C-4 explosives attached to UXO off Lanikai Beach. The detonation was the culmination of an all-day UXO removal for the special Navy team in cooperation with the Dept. of Land and Natural Resources. 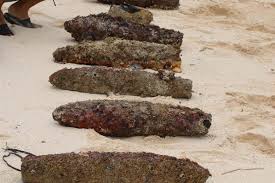 The operation was in response to a citizen report of possible UXO in February. It is believed that the items were WWII-era munitions dropped during military training exercises. Officers from the DLNR Division of Conservation and Resources Enforcement (DOCARE) and Honolulu Police patrolled the beach to insure no people entered the area during the detonation.

Biologists from the DLNR Division of Aquatic Resources (DAR) carried-out a baseline assessment last month to assess and document coral in the area and will revisit the site this week to conduct a post-blast assessment.

Linking Blogs | 411 Views
Comments
Comments are not allowed for this entry.