Kaho'olawe Island, Hawaii The Maui Fire Department reported that a fire has scorched approximately 4 square miles of the former U.S. Navy bombing range. Crews were reluctant to battle the fire on the ground due to the potential for UXO across the island. Although a partial clearance was completed in the 1990s, it was limited to about 65% of the island (surface clearance) and about 10% subsurface.

The Kaho'olawe Island Reserve Commission (KIRK) reported that the fire burned a restroom facility and a few vehicles but otherwise did not damage the 26 buildings or the base camp area.

Flagstaff, Arizona The U.S. Forest Service is trying a unique approach to monitor the Maroon Fire burning in the Coconino National Forest through the use of a drone equipped with an infrared camera and other high-tech sensors. Officials opted for the drone approach over explosive safety concerns from UXO in the area.

Currently, drones cannot be flown over or near wildfire or prescribed fires, because they can cause hazards to other aerial operations like helicopters and airplanes. In order to navigate the restriction, operators had to obtain a waiver approved by the FAA and coordinate their flights with local aircraft towers. 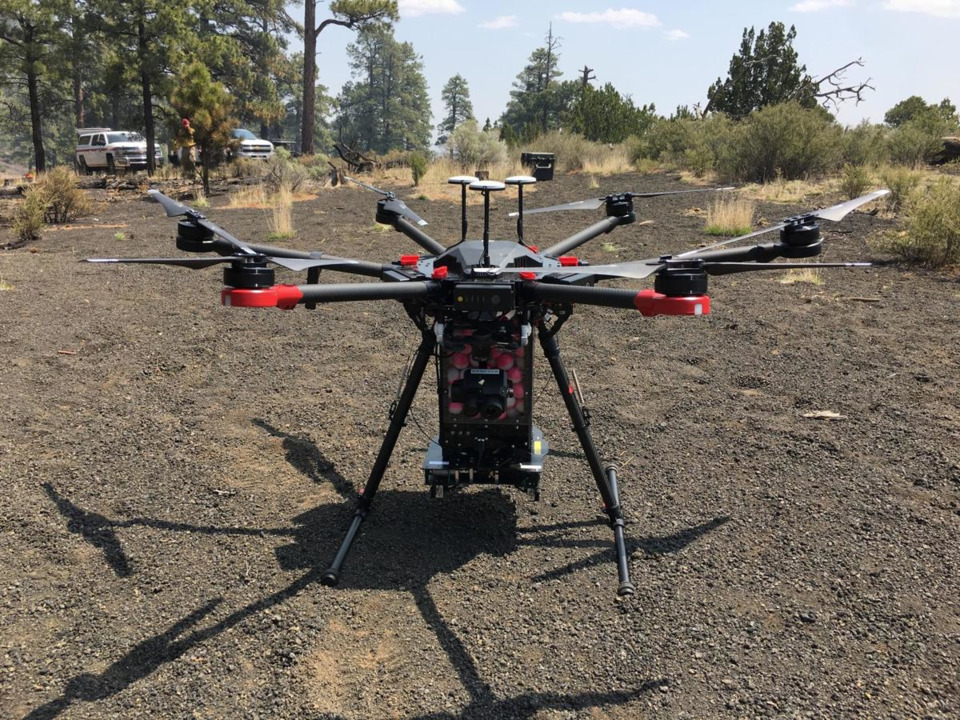 Fort Greely, Alaska BLM-Alaska Fire Service officials are monitoring the Oregon Lakes Impact Area Fire which has grown to over 4,000 acres. The fire is burning in a remote spot west of the Delta River that was burned over by the 2013 Mississippi Fire. The impact area is littered with UXO.

The Oregon Lakes fire was reported Range Control personnel who manage the Donnelly Training Area near Fort Greely. A spokesperson for the Fire Service released a statement that they "will continue to monitor the fire and work to contain it on Army-administered land."

Fredericton, Canada Hazards from UXO are causing problems for firefighters on the military base at New Brunswick's Gagetown base where fires are believed to have started due to training activities involving munitions. The explosives safety threat from UXO in the area has prevented firefighters from going in on foot to combat fires effectively.

A spokeswoman for the base has assured all concerned that the firefighters are ensuring that the fire cannot spread outside of the training area. In addition, she stated that alternative methods of combating the fire were being considered, including bringing in aircraft water tankers to fight the fire.

Oyen, Canada A UXO disposal operation conducted on Canadian Forces Base (CFB) Suffield is suspected of causing a wildfire which destroyed a farm including six structures and farm vehicles and equipment. The Base Commander told reporters that a disposal operation aboard the base sparked a wildfire which took a number of assets from both the base and off-base to control.

At the same time firefighters were fighting the on-base fire, a grass fire started north of the base with caused an evacuation of a school and 40 area residents. Twenty fire engines, 10 water trucks and other assets from several jurisdictions were deployed to battle the blaze. The fire destroyed farm owned by an 89-year old farmer whose family has been farming the area for at least two generations.

Vernon, British Columbia Firefighters from Vernon Fire Rescue Services and Wildfire Management Branch were forced to stop operations when they found an old WWII ordnance item while conducting the "mop up" phase after battling a wildfire.

The Royal County Mounted Police were called to the site and the Department of National Defense (DND) was also notified. A UXO recovery team responded, and the area was cordoned off while the item was properly disposed. 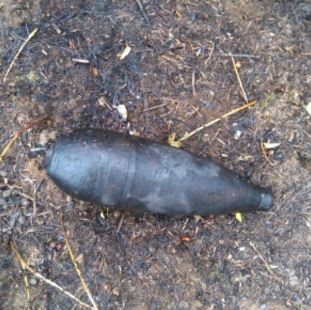 Fort Sill, Oklahoma An EOD training exercise at the Crater Creek demolition area is responsible for accidentally starting a fire which quickly grew. The fire along the installation's western edge burned approximately 6,400 acres. Fire crews utilized back burns and helicopters from the Oklahoma National Guard to contain and control the fire. Organizations responding to the fire include: Fort Sill Fire Department, Wildlife Refuge Fire Department and several volunteer firefighters from Comanche County. Officials stressed that the fire did not pose a danger to the public but did advise that heavy smoke is possible for the next several days.

Perth, Australia Firefighters fighting a fire near Two Rocks have decided to avoid an area suspected of containing UXO due to potential explosive hazards. The area, once used for military training, is not developed and no homes or properties are considered at risk.

Firefighter instead are waiting and watching the fire from a distance until it moves into areas not suspected of containing UXO. Nearly 40 firefighters have responded so far and several roads in and around the vicinity of Two Rocks have been closed.

Fort Hood, Texas Base Fire officials are preparing for a busy fire season according to Fire Chief Billy Rhoads. More than 160 acres have already burned this year and danger looms for Fort Hood's training ranges.

EOD Testifies At Inquiry About Fire Caused By Training

Sydney, Australia Australian EOD officers have testified before a commission of inquiry who are investigating the circumstances surrounding a fire at the Marrangaroo Training Area in Lithgow. The fire, which started on October 16, was found to be started during an EOD training exercise. As is continued burning for nearly a month, it became known as the State Mine fire and destroyed five homes and seven structures in the Lithgow area. Before being extinguished, the fire covered 50,000 hectares (approximately 123,000 acres).

Australian EOD Warrant Officer Andrew Newsome told the inquiry that his staff attempted to put out the fire with shovels and a hose, but the flames were just too high to control. Testimony also indicated that Defence personnel fighting the blaze were almost hit by fragmentation from UXO that exploded in the area due to the fire. In his testimony, Newsome told the committee, "There wasn't really anything we could do to fight that end of the fire...We couldn't get to the face of it ... there might have been more unexploded bombs."