Honolulu, Hawaii In 2004, the State of Hawaii took over management of Kaho'olawe Island from the U.S. Navy following a large scale UXO remediation effort which at the time, was the largest civilian UXO project. Along with the management, the Navy also provided approximately $44M in funds appropriated over several years for the long-term care and management of the Island.

Management responsibilities fell onto the Kaho'olawe Island Reserve Commission (KIRC), the organization that provided "oversight" for the state during the UXO clearance effort conducted by the Navy. The management efforts included tracking and recording UXO sightings for the Navy to remove on an as-needed basis.

Baton Rouge, Louisiana State Representatives Gene Reynolds (D-Minden) and Terry Brown (I-Colfax) have filed House Bill 11 for next year's Louisiana legislative session which states that the secretary of the Department of Environmental Quality can't grant a "permit, license, variance or compliance schedule that authorizes, nor shall the secretary allow in any manner, the open burning of any munitions or waste explosives."

The proposed Bill comes after an extensive battle with the U.S. Army and the U.S Environmental Protection Agency (USEPA) over the best disposal method for 16M pounds of M6 propellant at Camp Minden. The Bill will not impact the path forward set for the Camp Minden M6 propellant which calls for a controlled contained burn method of disposal.

Retired EOD Brian Mast will be appearing at 8:30 EST on the Lars Larson show to speak about his candidacy for Congress and the threats IEDs and explosives, in response to yesterday's horrific attacks in California.

To find the local information, viewers can visit //www.larslarson.com/affiliates/

People enter into the public service arena of politics for many reasons -- family tradition, a legal background, an aptitude for business, -- but Brian Mast came to the decision to run for office in a less traditional way.

Mast made the decision with his wife, Brianna, while recovering from an life-altering injury sustained in an IED explosion in Afghanistan. The Army staff sergeant was lying in a hospital bed at Walter Reed National Military Medical Center after losing both of his legs when a landmine exploded. An EOD Technician, Mast felt as if his life's work serving his country had come to an abrupt end, but it was there in the hospital that Mast and his wife realized there could be another way to serve.

"I was thinking how the best thing I had ever done in my life was now in my past," Mast said. "I was thirty years old when I was injured. I thought I would never be able to do anything better than serve the United States of America, but it was then that I realized that though I wouldn't be jumping out of planes and kicking in doors, I could still serve my country through public office."

Washington, D.C. The House of Representatives Armed Services Committee released a report on H.R. 1735, National Defense Authorization Act (NDAA) for 2016 which included language regarding the oversight of the Army's EOD program. The report "recognizes the importance of the Army EOD force as a unique and highly technical enabler" and also the importance of Army EOD's role in supporting of civilian law enforcement authorities in contingency scenarios.

Over concerns that the Army has not cleared identified future capacity and capability requirements for its EOD force, the Committee has requested a briefing by December 1, 2015 to include:

Senator Rubio Has a "Blast" at EOD School

Rubio visited the EOD Memorial and the current military construction project at NAVSCOLEOD, which includes the establishment of training spaces for divisions that are currently housed in temporary facilities, as well as other infrastructure and security enhancements.

Huntsville, Alabama A ground-breaking ceremony was held at Redstone Arsenal to mark the start of construction of the Missile and Space Intelligence Center's (MSIC's) Explosive Ordnance Exploitation complex. The $10M construction project is scheduled to take two years to complete with plans for the 25,000 square foot facility calling for seven stand-alone facilities and two open storage buildings. The explosive operations building will be used for missile disassembly and has four bays and an explosive proof infrastructure.

Washington, D.C. Representative Crawford (R- Arkansas) introduced a Resolution in the House to designate the first Saturday in May as National EOD Day. The Resolution also calls for the designation of the infamous 'Initial Success or Total Failure' motto to be adopted as the official motto of the EOD organizations in the United States Armed Forces.

Denver, Colorado A tentative lease for mineral rights associated with the former Lowry Bombing Range is in jeopardy from a bill introduced by Colorado lawmakers to impose strict rules for fracking near hazardous waste sites including sites with munitions and explosives. The mineral rights associated with the former Lowry Bombing Range are controlled by the Colorado State Land Board. The Land Board who over sees approximately 4 million acres of land typically solicits bids from energy companies for rights to access the natural resources including oil and natural gas. Reportedly, ConocoPhillips agreed to a $137M lease for oil and natural gas rights underneath the 21,000 acre former Lowry Bombing Range. The lease was approved by the Land Board in January.

Washington, D.C. Congressman Rick Crawford (R-Arkansas), a former Army EOD Technician in the late 1980s, serves as co-chair along with Congresswoman Susan Davis, of California, of the recently formed House EOD Caucus. The 19-member caucus was formed to educate lawmakers on how the importance of EOD on the Global War on Terror including counter-IED operations.

To promote the newly formed caucus, more than a dozen EOD soldiers from the 55th EOD unit out of Fort Belvoir, Virginia were invited to the inaugural event to showcase various technologies used by EOD. On display were interrogation technologies such as X-rays systems, personnel protection gear including newly design bomb suits, and various IED defeat tools. 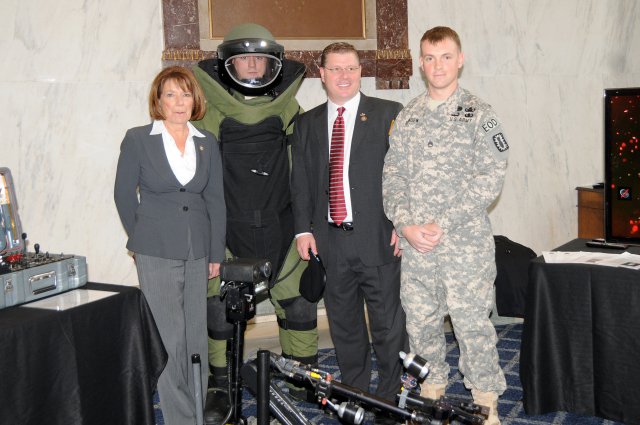