An overview of the Advanced Explosives and Ordnance Training Seminar held in Cambodia, 2018.

The Oklahoma State University (OSU), School of Forensic Sciences, CENFEX Program teamed with Golden West Humanitarian Foundation to provide another one-of-a-kind training opportunity in Cambodia, January 15 through 19, 2018. Those in attendance included people from corporate security, 3rd Marine Division, military EOD technicians, Public Safety Bomb technicians, the legal profession, as well as the OSU School of Forensic Sciences and School of Medicine. The details of the five training seminar are outlined below.


The first day provided an overview of the issues to be addressed throughout the week, including advanced technical concepts covered in a crawl, walk, run perspective. In the morning, everyone met in the hotel lobby, boarded the bus and traveled to the Cambodian Mine Action Center (CMAC), Ordnance and Weapons Museum. Upon arrival, we were met by Len Austin from Golden West HF. Len provided a brief on the history of warfare within Cambodia over the last 90 years, which resulted in unimaginable amounts of landmines, UXO and ERW still contaminating large portions of the country. With the depth and scope of the problem laid out, the guided tour of the museum began. 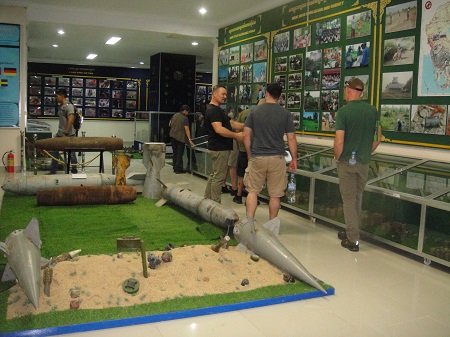 The majority of the ordnance displayed in the museum was inerted by Golden West personnel working under Len's supervision. As such, the details provided by Len throughout the tour offered tremendous technical and tactical insight. The group then traveled to Golden West's headquarters in Phnom Penh to tour the Advanced Ordnance Training Materials (AOTM) shop. Guided by Golden West's chief design engineer, John Wright, attendees were treated to hands-on demonstrations of the 3D printed,100%, 200%, and 400% sized fuzes, landmines, submunitions and other ordnance items. The group then moved to the Virtual Reality (VR) room and afforded an opportunity to experiment with ordnance-based VR training equipment. The images shows Len working with an attendee wearing a VR headset. 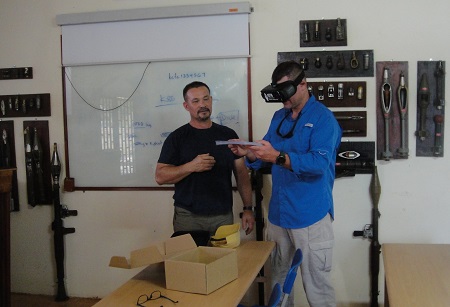 After watching the VR presentation of a munition, Len then handed a cutaway version of the same munition to the attendee and explained how the item functions. The level of understanding achieved though this multifaceted approach to training cannot be replicated through other conventional methods. Following the tours, the group traveled to a very nice restaurant for a traditional Khmer lunch before the final stop of the day.

UXO Problems at the US Army's Former Southwestern Proving Ground

Have you ever heard of a town called Hope, Arkansas? It should ring a bell. It's the boyhood home of Bill Clinton the forty-second President of the United States. But Hope was the home of the Southwestern Proving Ground (SWPG) during World War II. Built at a cost of $1,300,000, it also had the largest airfield in the state. At one time, SWPG had the reputation of having the highest concentration of UXO's per acre.

The SWPG was a 50,000 acre joint Army and Army Air Corps facility established in 1942 and closed in September 1945. SWPG's primary mission was to determine by actual firing tests of samples that all of the ammunition issued to the Army by the Ordnance Department was safe to handle and store as well as function properly when used in service by the troops. The explosives included small arms ammunition, artillery rounds, mortars, rockets, grenades, 500-pound bombs and 20-mm, 37-mm, 40-mm, 57-mm, 75-mm, 76-mm, 81-mm, 90-mm, 105-mm, 120-mm, and 155-mm projectiles.

The Battle for the Solomon Islands began on 7 August, 1942 when allied forces, predominantly U.S. Marines, landed on the Japanese held islands of Guadalcanal, Tulagi, and Florida. The fighting officially ended on 9 February 1943 after three (3) major land battles, seven (7) major Naval battles; as well as thousands of day and night raids, ship-to-shore bombardments, aerial engagements and other combat actions. The results of a very successful 3-year training effort on the Guadalcanal is the focus of this article. Specifically the efforts of 13 members of the Royal Solomon Island Police Force (RSIPF) from May 2011 through April 2014.

The Island of Guadalcanal is located in the Solomon Island chain, northeast of Australia (Figure 1). During the battle for this island; which raged for 6 months, over 30,000 men were killed. When the fighting ended, Explosive Remnants of War (ERW) and Unexploded Ordnance (UXO) that was not in the way was simply left in place; while anything obstructing construction was buried, moved out of the way or dumped in the ocean. Over the next 9 months, an area in the north central part of the island, designated "Hell's Point" was converted into a massive ammunition storage area capable of supplying Allied Forces throughout the South Pacific (Figure 2).

In November 1943 a grass fire burned into the Hell's Point Storage Area with catastrophic results. Three days of massive explosions resulted in Hell's Point being so badly contaminated with damaged ordnance that everyone living or working on Guadalcanal was restricted from entering this section of the island; these restrictions are still in place.

The challenges of developing effective and expedient protective works for the detonation of UXO faced by the EX-PAT EOD contractor technician in situations where safe separation distances from critical infrastructure are not an option can be met using methods more expeditious than those tended to with simply applying an adequate amount of dirt.

Dirt, soil, sand, while extremely effective in dampening the effects of a detonation and almost always available; require time and manpower resources to transport and place. Situations that today's EX-PAT EOD contractor may find themselves immersed in can require employing tactical as well as technical considerations focused toward minimizing time on scene. Developing alternatives to minimize the time required to construct hasty yet effective expedient protective works in these situations would seem to be of a paramount consideration. Concerning the development of alternatives to sandbags alone protective works constructions I have experimented with automotive tires as one such alternative.

In no way do I imply that I am an innovator by breaking new horizons through employing tires in a protective works construction. Automotive tires were, more than likely, used previously for this purpose was my initial thought. With this in mind; prior to attempting to incorporate tires into protective works training scenarios; the collective knowledge held by members of the Fragweb Forum was tapped for any previous experiences members had that they were willing to share concerning incorporating tires into a protective works application.

Environmental elements can obliterate the surface identification (ID) features from ammunition items that are necessary to determine the exact nomenclature. Two examples where this is very apparent are the M28 HE and the M29 Practice versions of the U.S. 3.5-inch rocket. When surface markings (stencils, stamps) have been stripped from the 3.5-inch rocket by the effects of years of exposure to the elements, there are no other identifying external features to positively distinguish between all models of M28 Series High Explosive (HE) Rockets with M404 Series Base Detonating (BD) fuzes and the M29 Series Practice Rockets with M405 Dummy Fuze.

Notwithstanding, unreferenced claims about using a crimped ogive or square bore riding pin holes to ascertain correct ordnance type; using an x-ray is the only positive method I have encountered to distinguish between fuze models of 3.5-inch rockets that have sustained surface deterioration due to sustained exposure to nature's elements.