Posted At : April 30, 2007 6:51 AM | Posted By : Admin
Related Categories: UXO Discoveries
Helena City, Montana  A local resident walking along a gravel road in Grizzly Gulch discovered 5 UXO items in the brush. The resident called the police who cleared the area and called in EOD support from Malmstrom Air Force Base. EOD safely detonated the items on site. One of the items was identified as a howitzer round. Another item, shown in the image below, appears to be a part of a TOW guided missile. 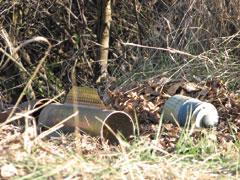 Posted At : April 27, 2007 4:01 PM | Posted By : Admin
Related Categories: Politics
Washington, D.C.  Buried in the "Bring the Troops Home and Iraq Sovereignty Restoration Act of 2007" (H.R. 508) is a $250M authorization for the destruction of landmines, UXO and cleanup of depleted uranium (DU) artillery in Iraq. The funding also known as the "Iraq Demining Fund" is in addition to the amounts otherwise available for such purposes. The language in the Bill allows the President to determine the exact terms and conditions in how the money is to be appropriated.

Posted At : April 26, 2007 11:43 AM | Posted By : Admin
Related Categories: EOD
In an effort to meet increasing manpower needs and mission requirements, the Navy announced an aggressive incentive program to attract retired EOD technicians into re-enlisting. The program is targeted to E-7 through E-9 qualified Master EOD Technicians that have between 19 and 25 years of military experience. The generous program pays up to 150K in bonuses.

Study of Injuries and Deaths Related to UXO Underway

Posted At : April 26, 2007 3:30 AM | Posted By : Admin
Related Categories: Research Studies
Marpi, Saipan  The Department of Public Lands and the Department of Public Health have recently begun a study to document the history of injuries and deaths caused by UXO throughout the island of Saipan. UXO left over from WWII are routinely found around Saipan and the rest of the Northern Mariana Islands.

Posted At : April 24, 2007 6:02 PM | Posted By : Admin
Related Categories: Historical / Classic
During the WWII time frame, U.S. and Allied Forces stored thousands of tons of CWM filled military munitions in various strategic places around the world. Often times due to corrosion or failures of the munition bodies themselves, leaks would occur. "Leakers" as they were called posed a serious threat to workers and could lead to the cross contamination of other munitions and equipment. Care was taken to identify leakers and remove them from storage. The leakers were typically drained or buried as a method of disposal. Drained CWM fillers were burned, dumped in holes dug in the ground, or put into storage containers to be dumped at sea.

Posted At : April 24, 2007 5:34 AM | Posted By : Admin
Related Categories: Document and Report Releases
The annual report outlining the progress made in the Defense Environmental Restoration Program (DERP) during FY2006 was submitted to Congress. The report provides a status of the Installation Restoration Program and Military Munitions Response Program (MMRP) sites. MMRP sites include sites on active DoD installations, BRAC installations, and Formerly Used Defense Sites (FUDS). A new addition to the FY2006 annual report was an update on the munitions sea disposal sites historical archives review and inventory. Summaries of the MMRP and munitions sea disposal findings are provided below.

A link to the EOD Memorial Fund website is provided below for those wishing to make a donation to support the memory of fallen EOD technicians http://www.eodmemorial.org/index3.html

Posted At : April 21, 2007 5:03 PM | Posted By : Admin
Related Categories:
Diyarbakir, Turkey  One child was killed and three others injured when a UXO exploded in southeastern Turkey. The children reportedly found the item in a trash bin and picked it up out of curiosity. The type of UXO was not specifically identified but authorities believe the item may have originated from the uprising Kurdish rebels started some 20 years ago.

Old Navy Ship Scheduled to be Scuttled By Munitions Training

Posted At : April 20, 2007 10:13 AM | Posted By : Admin
Related Categories: Training Ranges
Ottawa, Canada  Environment Canada approved a plan that would allow the military to float a retired Naval destroyer, the HMCS Huron, to a location in the Pacific Ocean for use as a munitions target. The plan calls for a joint U.S. / Canadian military exercise to fire live munitions at the target for training purposes until it sinks.

Posted At : April 19, 2007 10:06 AM | Posted By : Admin
Related Categories: Policies, Regulations, and Laws
A Bill to amend the Safe Drinking Water Act (SDWA) to require a national primary drinking water standard for perchlorate was introduced in Congress. HR 1747 known as the "Safe Drinking Water for Healthy Communities Act of 2007" would require a draft standard be published in the Federal Register within 12 months after the date of enactment and a final standard in place 18 months after that.