Posted At : May 29, 2007 8:40 PM | Posted By : Admin
Related Categories:
On July 4, 1942, the War Department, Ordnance Office released Technical Bulletin (TB) 200-6 on the Anti-tank (AT) MI Rocket Launcher. The MI rocket launcher was approximately 54 inches long with a 2.36 inches internal diameter. The complete system equipped with handgrips, firing mechanism, and aiming sights was used to launch the 2.36-inch M6 high explosive anti-tank rocket (shown in the image below).

Posted At : May 27, 2007 2:56 PM | Posted By : Admin
Related Categories: UXO Cleanup
Surf City, New Jersey - The U.S. Army Corps of Engineers (USACE) announced the completion of the Time Critical Removal Action (TCRA) of UXO from the surf city beach. Although the TCRA is complete and the beach is open, the USACE and the New Jersey Department of Environmental Protection (NJ DEP) are still warning the public of the potential for UXO.

Posted At : May 25, 2007 9:08 AM | Posted By : Admin
Related Categories: What Not To Do With UXO
Youngstown, Ohio  A worker from a construction company hired by St. Patrick Church found a UXO item at a nearby abandoned property he was clearing that was recently acquired by the church. The UXO was found under a collapsed garage from the abandoned building lot on Oak Hill Avenue.

Posted At : May 23, 2007 3:44 PM | Posted By : Admin
Related Categories: UXO Discoveries
Benson, North Carolina  A Civil War-era memorabilia collector reportedly emailed a company specializing in civil war collectables to get an appraisal on an unusual item he had purchased about 2 years earlier at a local garage sale. The man described the item to the appraiser as a Civil war-era cannonball that was "bigger than a bowling ball, but smaller than a basketball".

Concerned that the cannonball was live, the appraiser provided the man the phone number for the EOD unit stationed at For Bragg. EOD reportedly talked to the collector over the phone and arranged for the local county bomb squad to investigate the item. The bomb squad responded and identified the item as a 60-pound Civil War-era cannonball. However, they were unable to positively identify if the item was a solid shot or if it contained black powder due to its size, thick casing, and age.

Archaeologists Preparing for Dig on WWI Site Concerned Over UXO

Posted At : May 21, 2007 8:33 PM | Posted By : Admin
Related Categories: Research Studies
Mesen, Belgium  Trenches once occupied during WWI by Australian troops in the infamous Battle of Messines will be excavated for the first time in over 90 years in hopes of uncovering military history including the remains of missing soldiers. The week-long archeological dig scheduled to begin in July, is being staffed by a team of archaeologists from Britain's Ministry of Defence with participation from Australian Defence Force personnel. The Belgium military will be providing technical EOD support to the dig team because of the concern for UXO at the site.

Posted At : May 18, 2007 12:28 PM | Posted By : Admin
Related Categories: Accidents and Mishaps
Nazareth, Israel  An Israeli Military Industries warehouse full of munitions located in northern Israel caught on fire. The fire raged out of control for several hours as firefighters were forced to temporarily cease operations over concerns of exploding ammunition. The good news is that Friday is not a regular work day at the facility so only a small handful of personnel were working when the fire broke out. All workers were safely evacuated from the scene and no injuries or deaths were reported. The cause of the fire is unknown at this time. 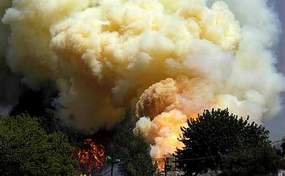 Posted At : May 17, 2007 4:25 AM | Posted By : Admin
Related Categories:
The Japanese Prime Minister, Shinzo Abe, announced that Japan would provide $1M in aid for the removal of UXO in Laos. The announcement came shortly after Laos announced that it would join the International Whaling Commission (IWC) at the request of Japan. This move would give Japan another ally within the IWC to push their pro-whaling agenda. It's unclear if the landlocked nation of Laos will be able to join the IWC in time for the upcoming member meeting in Alaska. A Japan Foreign Ministry official denied the UXO aid package was linked to the decision from Laos to join the IWC.

What Do UXO and Kangaroos Have in Common

Posted At : May 15, 2007 1:11 PM | Posted By : Admin
Related Categories: Training Ranges
Canberra, Australia  The Australian Defence [Defense] Department announced that they want to shoot close to 3,000 kangaroos within the Majura military training range. The Defense Department claims that the kangaroo population in the area is so dense (estimated at 1,100 kangaroos per square mile) that the habitat of several endangered species is being destroyed. They also claim that the kangaroo population is too dense for the drought-ravaged environment to sustain and without the thinning of the population, they face starvation.

Posted At : May 12, 2007 4:22 PM | Posted By : Admin
Related Categories: What Not To Do With UXO
Barstow, California  A man and his younger brother were handling a UXO item in the man's apartment when it exploded. Neighbors called the police and reported the explosion. Barstow police quickly responded to the Santa Fe Community Mobile Home Park and Apartment Complex and found smoke billowing from the apartment building. Police and emergency rescue personnel found the two brothers inside and removed them to a nearby open field area where an emergency medi-vac helicopter could land.

Perchlorate Used in Munitions As Early As 1944