Posted At : April 10, 2012 6:23 AM | Posted By : Admin
Related Categories: WWII Era UXO Finds - Underwater Related
Suuffolk, United Kingdom Local boaters off the Harwich Coast between Felixstowe and Harwich have reportedly known about an old WWII era German V2 rocket embedded nose down in the mud flats 600 feet from shore. Boaters in the area have even been known to moor their boats to it. It's unclear why the rocket was never officially reported to the police but nearly 67-years after being fired, a Royal Navy bomb disposal team from Portsmouth responded to investigate the suspect rocket. 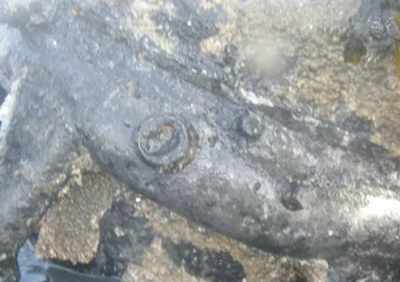 The bomb disposal team initially set-up a 120-foot exclusion zone around the area. Due to the sheer size of the rocket and the muddy conditions, it was impossible to tell how much of the rocket remained. The V2 was a liquid-propellant rocket that packed close to 2,000 lbs of explosives. The V2s were notoriously inaccurate but when they did hit their intended target, they created massive destruction. Historians estimate that more than 3,000 V2 rockets were launched by the Germans mainly against targets in London and Antwerp.

The Royal Navy bomb disposal team successfully recovered the V2 remnants from the mud flats transporting the remains shown in the picture below to a jetty of the Harwich and Dovercourt sailing club. The explosive load was not intact. The future of the rocket remnants is yet to be decided. 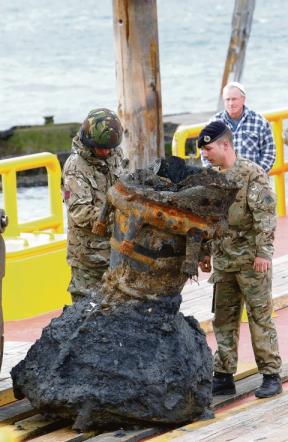 Linking Blogs | 4913 Views
Comments
Comments are not allowed for this entry.