Remembering An EOD Hero Whose Legacy Will Live On

Chances are if you were lucky enough to know Marine Corps GySgt. Floyd Holley you would probably describe him as humble and self-effacing. That is what surprises Chrissy Holley, Floyd's wife, the most about the call she received from him one night from Afghanistan. "Floyd was the most humble person I ever met. He never wanted to take credit for anything." This night, weeks before his death during Operation Enduring Freedom, he told Chrissy that he had used a tool that, in his words, "is really gonna save a lot of guys." That "something" would turn out to be an IED manipulation tool which was eventually named the "Holley Stick" in his honor after he lost his own life to an IED.

SSgt. Matthew Jackson, Floyd's friend, visited Chrissy along with five other battalion commanders whom Floyd had worked with during his deployment. "They all came in to meet me and give a personal account of how special he was. It was then that they gave me the background on the stick," said Chrissy. In particular they described a mission during which they were expected to lose a lot of men, but thanks this new tool, they only lost two. The stick was a make-shift pole with a sickle duct taped to the end. "I am working with what I've got," Floyd would say. After his death, Matthew wanted to make sure that the tool went into R&D and more importantly that it be called the "Holley Stick."

In an explanation of the tool's history, Matthew explains, "The Sickle was originally shown to Floyd Holley by another Marine EOD Technician, GySgt Farmer, while he was in Afghanistan during 2009-2010 deployment cycles. The original Sickle was about 3 feet in length and was comprised of a bamboo pole with a farmers hand scythe duct taped to it. Originally, the Sickle was only utilized as an EOD specific tool, and served the purpose of testing ground density of disturbed earth."

During the summer of 2010, Floyd and Matthew were tasked with supporting the takeover of an area called Safar Bazaar in the Southern Helmand providence. The Company level operation consisted of three EOD Teams, who were tasked with facilitating movement in vicinity of the bazaar for 3rd Battalion, 1st Marines, Lima Company.

Matthew continues, "Up to this point the Sickle was only employed by Floyd in his previous AO, which was not very active with IED's. During the planning for Safar we learned that the enemy was very aware that we were coming and were actively walling themselves in with massive numbers of devices.

During the assault on Safar, my team approached dismounted through an urban section attached to the bazaar, while Floyd and his team conducted a helicopter assault on an elevated piece of terrain some 300 meters from the bazaar in order to provide my element over watch. In the assault, of what was then called KT1, now Gun Position Holley, Floyd and his Sickle expeditiously located 10 victim-operated IED's on top of the hill.

During this time I had moved into position and started finding devices along the periphery of the bazaar itself. I was finding devices, literally, by making snow angles with my hands because our metal detectors were useless. After a couple days of me swimming for bombs, Floyd, who I had seen sun tanning on KT1, required a resupply and came to my position. It was then that I took a serious look, at what I initially thought was a stupid tool. Work smarter not harder is a saying for a reason.

I decided, rather than make more sand angles, I too should utilize the Sickle in order to speed up the process. I fashioned two, one for me and one for my teammate. Within a few minutes of clearing the entry point of the bazaar I had found three devices. Needless to say I was sold.

While conducting a nightly debrief with Lima 3/1 Company Commander, Major John Kennelly, I convinced him to allow mass employment of Sickles IOT speed up the clearing process. Within 7 days/60 devices later the bazaar was clear and reopened. (The clearing of the bazaar was scheduled to take 2-3 weeks).

After the bazaar was secured we focused on pushing the enemy out of the Green Zone surrounding the bazaar. To do this 3rd Battalion, 1st Marines had to conduct maneuver warfare against an enemy who hid behind defensive belts of IED's. The Sickle provided 3/1 with the ability to maneuver amongst IED saturated terrain, providing concealment, ultimately contributing to the eradication of the enemy from the area via fires."

The day before Floyd was killed both his and Matthew's teams cleared a piece of Key Terrain (KT2) and built a Gun Position atop it. KT2, later named Gun Position Thompson, became the nail in the coffin of the enemy. The image below shows Floyd, Matthew, and EOD team taken on top of KT2. 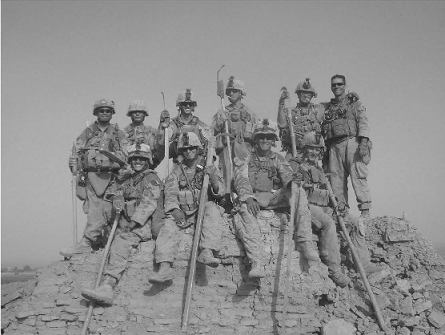 After the 2010 deployment, the Holley Stick was adopted by most units operating within the Helmand and heavily contributed to the success of Coalition Forces in the area. The tool went into R&D and was eventually transformed into an IED tool kit for Marine Corps EOD to use as a supplement to an existing tool kit. Ordnance Holdings, Inc. (OHI), was contracted to produce the kits for use in Afghanistan and the new product was indeed branded as the Holley Stick.

Chrissy explained how her daughter, born three months after Floyd's death, recently wrote a love letter to her daddy on a balloon and released it this Memorial Day. She turned to her mom and asked, " Is this going to found my Daddy?" Though it is difficult to face each day without her humble, honorable husband, Chrissy is comforted by the fact that he touched so many lives and always put others first.

Linking Blogs | 9644 Views
Comments
Comments are not allowed for this entry.