It is the responsibility of the military to dispose of all military ordnance. When ordnance are found off base, local bomb squads are usually the ones called to the scene, but once it's determined to be belong to the military, they turn the scene over to 628th CES EOD technicians.

"Anything local authorities find that is identified to be military ordnance, they immediately contact us," said Staff Sgt. Mars Hanse, 628th CES EOD craftsman and team chief for the event. "We analyze all explosives with intense safety measures; donning the required protective equipment and accepting the necessary risks when approaching every explosive." 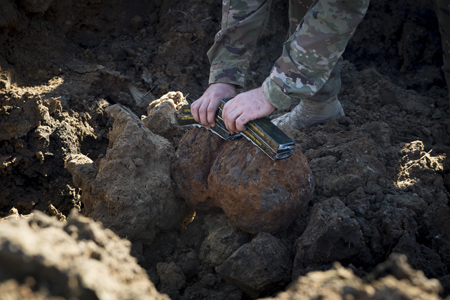 Unearthing Civil War bombs and other explosives is a sporadic, but not a rare occurrence around the old battlegrounds of the southern United States.

"When we arrived on-scene in October, we had to X-ray the objects to ensure that they were actual cannonballs," said Master Sgt. Joseph Leslie, 628th CES explosive ordinance technician. "Even though the cannonballs have been submerged underwater for over a century, we still had to treat them with a high degree of caution."

From October to now, the ordnance was awaiting disposition with JB Charleston EOD. Fifteen were detonated at JB Charleston's Naval Weapons Station EOD range. Two of the cannonballs will be inerted, which is the process of removing the explosive materials while leaving the casing intact for display. These two cannonballs will be displayed at the South Carolina Civil War Museum, Myrtle Beach, South Carolina.

"After the discovery, we contacted the South Carolina Civil War Museum historian to see if they would like any of the cannonballs for display," said Hansen. "As of right now, we are also working with a U.S. Marine EOD unit to see if we can have them inerted so that they can be safely used by the museum."

EOD's technical orders and publications provide their technicians with guidance on the proper disposal techniques as well as the ability to accurately identify and safely handle ordnance.

"Planning is key to all (demolition) operations," said Hansen. "Researching the munitions involved, pre-planning safety briefs, and risk assessments are crucial to our success on the range."

During the event, base leadership attended the demolition. Leadership also engaged with members to learn the critical components of the team's procedures and unit cohesion.

"I think it was awesome to have base leadership observe us," Hansen said. "It was great that they were willing to take time out of their day to see us do our mission."

Linking Blogs | 2425 Views
Comments
Comments are not allowed for this entry.