An excerpt from the 1945 Bomb Disposal Technical Information Bulletin No 53 issued by the Ordnance Bomb Disposal Center, Aberdeen Proving Ground, MD published on 1 June 1945. The excerpt below is from the section of the bulletin titled "New Grenades Found On Luzon."

"The majority of the new type grenades found on Luzon were improvised grenades that could readily have been made up in the field. New types recovered are:"

The bulletin described each as follows:

"25mm Shell Case Grenade: This improvised grenade is simply a 25-mm shell case filled with chipped cast type 98 explosive in the base and an unidentified explosive in the upper portion of the shell case. The safety fuse leading to the detonator is set in wax and cotton thread plug in the nose of the shell case. Apparently the safety fuse is meant to be ignited by hand. There is a 4-5 second delay. Explosive charge weighs 806 grams."

"30mm Hollow Charge Rifle Grenade: This grenade is an exact reproduction of a smaller scale of the 40mm hollow charge rifle grenade. It is 6.5 inches long. it has a 30 degree cone in the nose with a 1 inch stand off. The tail section of the two grenades are interchangeable."

"Gas Pipe Grenades: The gas rifle grenades have been found in four sites, all basically the same in design. A short section of iron pipe, closed at one end is filled with explosives. An iron disc fits in the other end of the pipe. In three types, the disc is held in by friction fit, in the fourth type it screws into the end of the pipe. A short iron tube with an internal diameter of a .22 caliber bullet is fitted into the center of this disc. Safety fuse and detonator ignited by a .22 caliber blank cartridge detonate the grenade. The cartridge fits up into the blank cartridge. Apparently the cartridge is meant to be set off by striking it with the some hard object. One design uses the fuse for type 91 grenades." 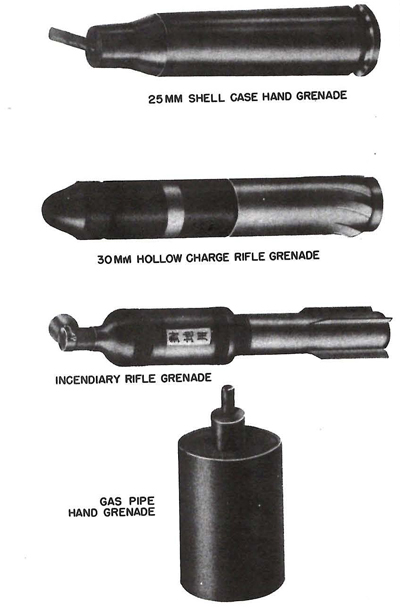 If you have any UXO history you would like to share including documents, images, and/or articles for posting, please send them to Rhonda at rhonda@uxoinfo.com.

Linking Blogs | 948 Views
Comments
Comments are not allowed for this entry.