Birmingham, United Kingdom Police and EOD responded to a river outside of a Birmingham after a magnet fisherman reeled in 19 grenades from the water. Che Williams was using his magnet to search for metal debris in the River Tame when he pulled the first grenade out of the water.

He remained in the same spot and pulled up a total 19 grenades. Two of the grenades reportedly still had their pins in place, prompting him to contact police. 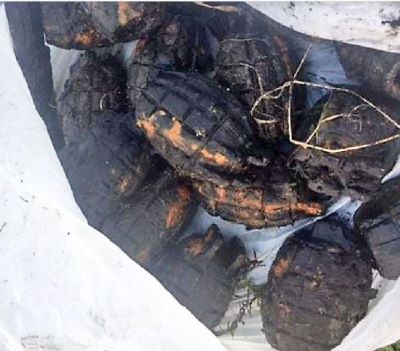 Police evacuated the area and EOD arrived at the scene to investigate the grenades. The team used an X-ray on the devices and determined they did not contain explosives or detonators.

Williams said he was disappointed to learn the bomb squad would be destroying the grenades due to policy for such discoveries. Atherstone & Coleshill Police posted photos of the grenades on Facebook along with a reminder for residents to be cautious of such potentially dangerous discoveries while magnet fishing.

Linking Blogs | 702 Views
Comments
Comments are not allowed for this entry.