Warning Issued to Trespassers at An Army Training Range

Angus, Scotland Numerous reports of people racing bikes, scooters and ATVs at Barry Buddon Camp have led to a stern warning from police. The warning comes in addition to signs posted at the British Army training center about potential dangers from UXO.

In a public release, local police announced the following - "There has been substantial damage caused to Ministry of Defence property, such as shooting ranges and safety gates. The public should also be aware that there are often unexploded devices found in the area which also pose a risk to their own safety." 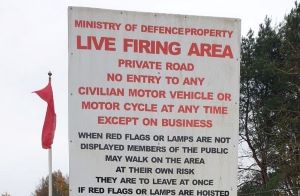 The statement went on to say, "There are currently signs in place at both entrances to the Barry Buddon Camp reminding the public that it is an offence to take any unauthorized vehicles onto the land there, so taking scramblers and quad bikes, etc. is strictly prohibited. The public are also reminded that there are CCTV cameras on the site which can be used in the prosecution of offenders."

Linking Blogs | 265 Views
Comments
Comments are not allowed for this entry.