Wemyss Bay, Scotland the crew of a Marine Scotland research boat found got a surprise from the sea when they pulled up an old sea mine. The crew notified Cost Guard who responded to the vessel. Pictures were sent to the Royal Navy EOD team for review.

EOD identified the sea mine as a WWII era German mine that appeared to be live. EOD responded to the vessel as the seven crew members were evacuated by lifeboat before their vessel was sailed to Ettrick Bay on the Isle of Bute. 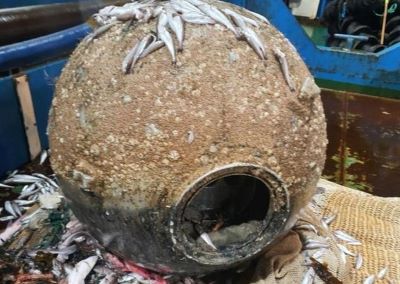 EOD carried out a controlled detonation of the sea mine which reportedly contained 350kg of explosives. In comments to reporters, Lieutenant Commander Mark Shaw, Commanding Officer of the Royal Navy's Northern Diving Group, said the German submarine-laid mine was in "remarkable" condition considering it had been in the water for 80 years.

Linking Blogs | 283 Views
Comments
Comments are not allowed for this entry.