Grève d'Azette, Jersey Police suspect that an unsuspecting civilian picked up a grenade that washed up on the beach and carried it to a city street where it was left on the side of a wall. Others spotting the item called the police and the island's bomb disposal officer was called to provide technical support. 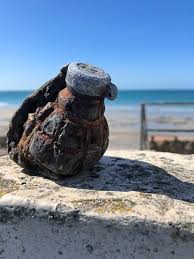 The bomb disposal officer safely removed the grenade from the area for proper disposal. Later, in a social media post, the States police urged Islanders never to touch any suspicious items which they found on the beach and to call them immediately. The post read - 'This live grenade had been picked up by someone and placed on a wall in St Clement anything could have happened. The bomb disposal Officer has taken this one away, If you do find anything like this then please get in touch with us immediately.'

It followed a similar incident which took place earlier this month when a WWII era munitions was picked up off the beach and taken home. It was also eventually dealt with by the island's bomb disposal officer.

Linking Blogs | 430 Views
Comments
Comments are not allowed for this entry.