Lakeland, Florida A contractor at the Lakeland Linder International Airport got the shock of his day when he opened a container to find what he described as a "massive guided missile." The police were called and the airport was evacuated as an EOD team from nearby MacDill Air Force Base responded to remove the item which was deemed to be "live but not armed." 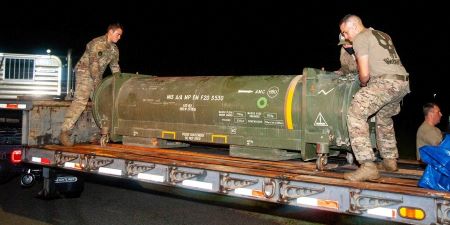 It's unclear how exactly this missile got there. According to local news reports the container originally arrived at the airport with pieces of an aircraft inside and belonged to a company called Draken International. EOD along with support from the Lakeland Fire Department, and the ATF were able to safely relocate the ordnance from the airport.

Draken International provided the following statement to the press following the incident. "Draken International, in the process of evaluating arriving shipments discovered something questionable and potentially explosive. Adhering to the explosive safety rule of exposing the minimum amount of people for the minimum amount of time to a potential explosive hazard the decision was made to evacuate the facility and its surrounding neighbors and contact the appropriate authorities. Draken takes its roll in the community seriously and always wants to ensure it performs safe and reliable operations."

Linking Blogs | 300 Views
Comments
Comments are not allowed for this entry.