The One That 'Got Away' is Finally 'Reeled In'

Saluda County, South Carolina Following a search lasting several days, authorities from three South Carolina counties finally located the military ordnance discovered by an angler at Lake Murray. Saluda, Newberry and Lexington Counties combined forces in an extensive search of the murky lake waters after the man, using a casting net for bait, snagged what he described to be a possible military ordnance.

Once he recognized the item as possible ordnance, authorities say he let loose the casting net, marked the area and notified authorities.

Officials at the Newberry County Sheriff's Office have now reported the ordnance as found. Because it was military ordnance, US Air Force EOD was called in to identify and detonate the ordnance identified as an 81-millimeter military mortar round. 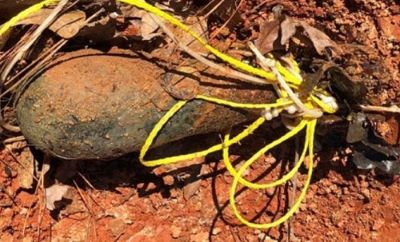 The round was buried and covered with sandbags and then detonated by EOD. "We decided it was best for us to just destroy it because it was too risky to transport it anywhere else," said Josh Price, Saluda County Sheriff.

"We do not know at this time whether the device was live, used in some military exercise at some point or it could have been stolen from a museum or passed down from a family member at some point, discarded," said Price.

Linking Blogs | 160 Views
Comments
Comments are not allowed for this entry.