Kandal Province, Cambodia an excavator operator digging a pond at a construction site near the Phnom Prasith Resort struck a hard object 20 feet below the ground surface. The operator got the surprise of a lifetime when he pulled the object to surface and discovered it was a bomb.

The operator reported the bomb to his supervisor who contacted authorities. A humanitarian demining organization responded to remove the bomb identified as a U.S. MK 82 general purpose (GP) bomb. A smaller bomb (type not identified) was also found at the site. 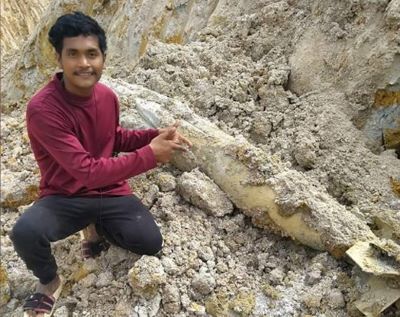 A local reporter covering the story interviewed the operator about his potentially dangerous find. The operator described the initial find - "I thought it was a log, so I plunged the excavator bucket deeper into the ground and pulled it up." The operator went on to say - "I was lucky because the bucket teeth were blunt and couldn't penetrate the bomb, otherwise, it would have exploded." He then jokingly told the reporter, "I think I am more powerful than the bomb. If it were more powerful than me, it would have exploded."

Linking Blogs | 98 Views
Comments
Comments are not allowed for this entry.