Emergency Response As Elderly Woman Throws out Mortar with Her Trash

Manchester, England An 82-year-old woman sparked an emergency evacuation after she left a WWII-era bomb out with the trash outside her home in Greater Manchester. She reportedly found the old mortar shell three weeks prior among a bag of debris in her shed.

Police, firefighters and bomb disposal experts responded to the scene after a concerned neighbor saw it while helping the bring in her trash bins after collection day. The neighbor advised her to move the piece of ordnance to her backyard garden. Luckily family members looked up the item online and alerted emergency services after realizing the potential danger. 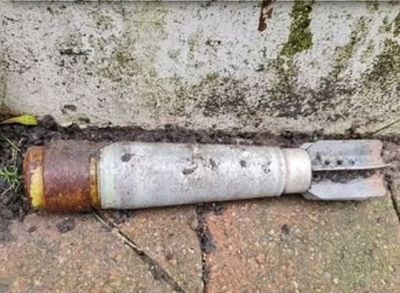 Some residents in the area were evacuated and others told to stay indoors and keep their doors and windows closed as EOD from Chester inspected the ordnance and removed it for proper disposal.

A statement from Greater Manchester Police was issued which read, "Police were called at around 11.30am today, (Sunday 31 October), following reports of a suspicious object on Moss Lane in Swinton, Manchester. A cordon was put in place as a safety precaution and a number of residential buildings were evacuated. The EOD team was notified and after assessing the item, declared it safe.

The woman's daughter said, "The police were wonderful. They were very professional and it was declared safe. It wasn't live, but we all had to go through the process. It was in a bin bag with a load of rubble and concrete in it left by the former owner in the shed."

Linking Blogs | 744 Views
Comments
Comments are not allowed for this entry.