Seaford, Virginia Children playing with a metal detector near their home discovered a large, round object buried a couple feet below ground. They brought their find inside the house to show the parents who immediately cleared the kids away and called the York-Poquoson Sheriff's Office (YPSO) as they recognized the item as a cannonball.

Sheriff's deputies who responded notified EOD from Naval Weapons Station (NWS) Yorktown. The detachment took possession of the ordnance, later determined to be a Civil War-era, 12-pound smoothbore round from the Union Army. 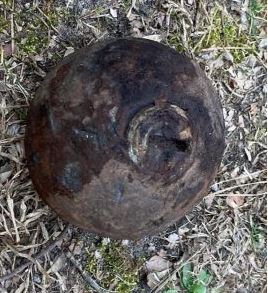 According to a statement from NWS Yorktown, the 160-year-old ordnance was significantly corroded and contained black powder. EOD disposed of the round by controlled detonation.

YPSO praised the residents on social media for calling 911 instead of trying to examine the potential explosive themselves. NWS Yorktown and the sheriff's office both reminded the public the importance of calling local law enforcement if a suspected UXO is found on their property.

Linking Blogs | 160 Views
Comments
Comments are not allowed for this entry.