Book Review - THE HALF SHELL BOOK


I recently received a copy of the book "Civil War Artillery Projectiles - The Half Shell Book " by Jack W. Melton, Jr. My friend and Navy Explosive Ordnance Disposal (EOD) tech CWO4 John D. "Bart" Bartleson, Jr., USN Retired (1936 - 2016) wrote the forward for the book. For many years "Bart" was the historian for the Navy EOD Association (NEODA). Bart authored the book "Civil War Explosive Ordnance 1861 - 1865," U.S. Government Printing Office, 1972, which contains radiographs (x-rays) of Civil War ordnance (available on PDF). Many of Bart's original radiographs are used in the book as examples. 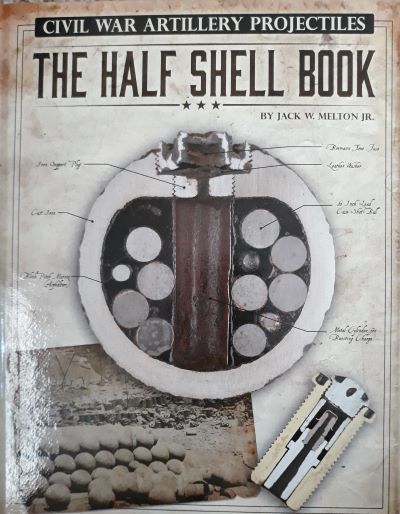 This book is the most detailed and comprehensive book on Civil War artillery ordnance that I have encountered. No light reading here. It is written from an ordnance engineer/designer perspective, with analysis of manufacturing, metallurgy, fuzing, active and non-active filler, plus historical usage of the munitions and where a particular piece of ordnance was found.

I have learned more about Civil War artillery projectiles and their fuzes from this book than any other published source and I have several Civil War artillery ordnance books in my personal library. This book removes the mystery in what lies within the projectiles and their fuzes so one can better assess how hazardous the piece of ordnance is. The book also informs the reader if a particular artillery projectile is considered rare. With a better understanding of the dangers (or no danger at all) an educated assessment can be made on whether a piece of ordnance should be disposed of properly or can be rendered safe/inert. There are proper facilities and procedures to render items safe for display. This should be considered if an piece of ordnance is considered rare or unique. The U.S. Marine Corps EOD have the legal authority to render safe/inert ordnance for display and/or intelligence purposes. In my opinion, all too often museum collection pieces if found to be live are just destroyed in the name of "public safety," when the piece is relatively safe to handle and can be placed off exhibit in a secure, environmentally controlled, isolated storage area until proper arrangements are made to inert the piece. This book will educate the first responder to the real hazards of the projectile and not a perceived hazard based on lack of knowledge of the projectile.

I recommend this book to be in the research libraries of all the military EOD services down to at least the Battalion level, civilian law enforcement bomb disposal squads that serve areas where Civil War ordnance may be discovered, and to the both the ATFE laboratory and the FBI's Bomb Data Center. This would also be a good reference book for the U.S. Army Corps of Engineers and the U.S. Army Ordnance School. Of course any museum that holds Civil War ordnance in their collections should have a copy of this reference book.

The reviewer, Mike R. Vining, is a retired U.S. Army Sergeant Major who served in the army from 1968 to 1999 in the Explosive Ordnance Disposal and Special Operations field.

Linking Blogs | 284 Views
Comments
Comments are not allowed for this entry.