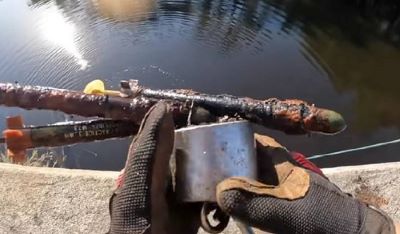 According to Nachtwey, he and his team had called the DNR ahead of time, which purportedly said magnet fishing is legal as long as it's in a "green zone." The warden said that red (off-limit) and green (acceptable) zones don't apply in this scenario because the group was on Fort Stewart property. Since the base is owned by the Federal Government, the DNR has no authority to issue such permission, though it can ticket for offenses in the area.

The warden issued three tickets each to each of the men, two $130 tickets and one $80 ticket, for magnet fishing at Fort Stewart, entering a closed area and not having Fort Stewart permits. Fort Steward has a general 3R (Recognize, Retreat & Report) orientation and requires anyone that hunts or fishes on the installation to follow these DOD/DDESB guidelines. These "so called" fishermen were in violation of these installation conditions for hunting and fishing. A federal court date is set for September 9, 2022.

There are no comments for this entry.