Re-post of an article from the Fort Hood Sentinel website

As early as 1978, according to a 2015 report prepared by the assistant secretary of the Army, the Panamanians raised the question of potential hazards and the feasibility of removing any potential chemical munitions on the island. As Panama acceded to the Chemical Warfare Convention in 1998, San Jose Island was looked at for development and the issue of the potential hazards was raised again. The report states that in 2001, a private company surveyed the island and documented the presence of chemical warfare items, some of which were of U.S. origin. 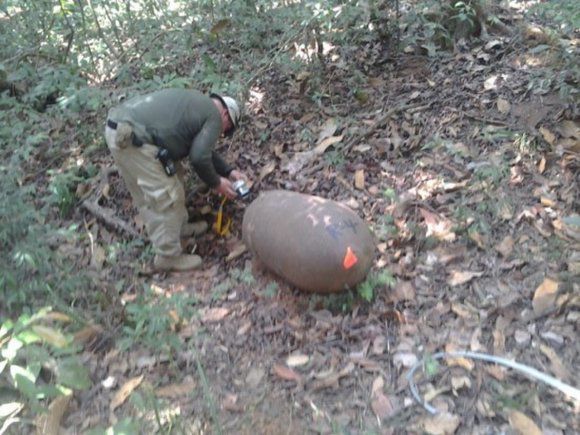 Following sonar mapping of the lake, divers put on chemical suits before entering the water to recover ten 6-pound canisters. The recovered were turned over to Lincolnshire Police, who are investigating how the items ended up in the area.

Washington, D.C. Last month, five workers at 4825 Glenbrook Road (part of the Spring Valley project where the prior American University Experiment Station was located) were potentially exposed to an unknown chemical. The site crews are remediating WWI-era CWM at the site. Five of the seven workers exhibited symptoms of eye irritation and minor stomach issues. The workers were decontaminated onsite and reportedly all symptoms had subsided within an hour of the potential exposure. However, as a precaution, the workers were sent to George Washington University Hospital for medical monitoring and observation. All of the workers were released for work later that evening and all reported to work the next day.

The worksite where the possible exposure occurred was not shut down but has entered into a non-intrusive work pattern while a formal board of USACE, EPA and District of Environment and Energy (DOEE) officials investigates the incident. The board is expected to release a report at the end of October at which time a return to work phase will be announced.

The USACE Baltimore District provides weekly updates on the ongoing project at http://www.nab.usace.army.mil/Home/Spring-Valley/.

Tooele, Utah Mustard-filled munitions were found during the cleanup of a Utah chemical depot, according to Army Spokeswoman Alaine Grieser. The Deseret Chemical Depot, a 19,000-acre facility whose Chemical Agent Disposal Facility was closed in 2012, still contains 27 informal dumps where weapons and debris were burned in the years before the environmental impact of such actions were understood. Among the munitions found were buried containers of mustard, a liquid blistering agent, contained in non-explosive mortar cartridges.

Posted At : November 11, 2009 11:48 AM | Posted By : Admin
Related Categories: CWM Non-Stockpile Related
Columboola, Australia A survey crew working for coal company scouting out locations for new coal mines uncovered a cache of WWII era shells. The workers called the police who responded with support from an Australian Defense Department EOD team. In all, 144 shells were found with three confirmed as CWM filled (mustard) rounds. The mustard rounds have been over packed in storage container and transported for safe keeping until they can be properly disposed of. The location where the rounds were found was reportedly a former U.S. weapons facility during WW II. The rounds were identified as WWII era U.S. shells (size and specific type not reported).