Charleston, SC Construction crews working in the area of 1300 Meeting Street unearthed ordnance two days in a row. In both cases, Charleston police responded and evacuated people from nearby buildings as they contacted the military for support. 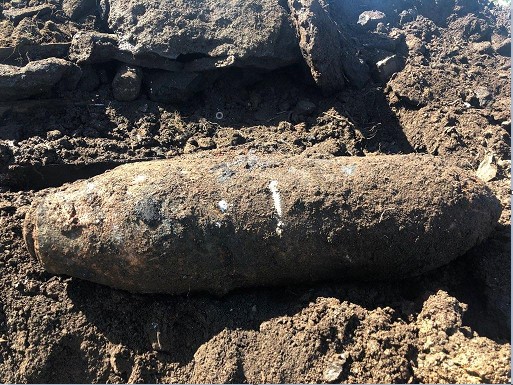 Tokyo, Japan Workers at offices near a construction site for a new apartment building in Koto Ward were evacuated after a UXO found. A member of the construction crew notified local authorities after the 4 ft-long ordnance was unearthed at the site near the Ariake Tennis Park.

Officials determined it was a 500-lb incendiary bomb, dropped by the U.S. during WWII. Members of the Ground Self-Defense Force arrived at the scene to render bomb safe to transport from the site for disposal.

Hong Kong, China A second WWII era UXO was discovered on the construction site in China where the EOD teams had recently diffused a nearby 1,000 pound bomb. The second bomb was also reported to be a WWII era 1,000 bomb. However, this one was harder to deal with because the fuse had been badly damaged making it unsafe to move. 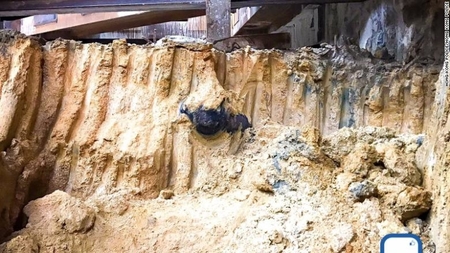 EOD Gets a "Two for One" on UXO Response

Warrington, England EOD teams were called to a construction site in Warrington twice in a 12-hour time period. After the first WWII UXO was discovered (shown below), the Royal Logistic Corps Bomb Disposal team was called in and unfortunately had to wait overnight before being able to detonate the device. For nearby homes, this meant evacuation; some to family and others into provided hotels. The nearby street remained closed overnight with a guard posted overnight. 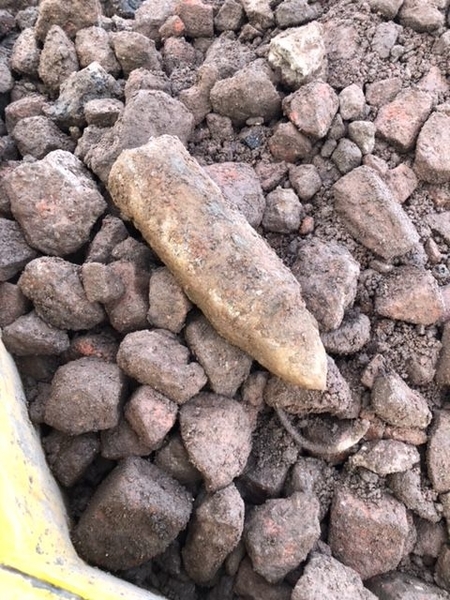 Excavator Versus Grenade - A Battle of Fire and Ice

Cambridge, England Things got heated up during the construction of an ice rink in Cambridge as a grenade ignited the bucket of an excavator. Knowing the danger this presented to the job site, EOD technicians were called in to assist in removing other grenades on site.

The Royal Logistic Corps Bomb Disposal team arrived on scene and identified the grenades WWII era likely buried after the war. Due to the late hour, a perimeter was set up and the grenades were safely watched until the following morning when the bomb disposal team was able to safely detonate all the discovered items.

Edison, New Jersey Construction crews preparing the foundation for a new building at Middlesex County College in Edison unearthed a 500-pound WWII bomb. The find was not surprising given the fact the campus is situated on the grounds of the old Raritan Arsenal.

Workers had been trained in the "Three R's": Retreat, Report, and await the Response, and they followed the procedure once the munition was encountered. The 87th Civil Engineer Squadron EOD responded and removed the device to a remote section of Fort Dix Joint Base McGuire-Dix-Lakehurst. They used C-4 explosive to safely detonate the ordnance.

Honolulu, Hawaii Concerns over WWII UXO on some Big Island properties have forced two federal housing-assistance programs to suspend grants and loan guarantees for Native Hawaiian housing at those locations. Among those programs on hold is a $2 million grant for infrastructure work at a Hawaiian homestead development in Waimea.

Also affected are several families planning to build new homes. The U.S. Department of Housing and Urban Development (HUD) has stopped issuing loan guarantees in the areas. Officials from the department recently learned that five homestead communities are within 100,000 acres contaminated with remnants of bombs, grenades and other munitions, remnants of WWII training exercises in the area.

Sebewaing, Michigan Huron County Road Commission workers and contractors working under a USACE funded flood control project utilized explosives to break ice in the Sebewaing River near the mouth to Saginaw Bay. The project was carried out in coordination with the Michigan Department of Environmental Quality and Michigan Department of Natural Resources.

The purpose of the blasting was to prevent ice dams from forming and to reduce the potential for flooding in the spring time. Ice blasting is only required when certain conditions are met including thick ice (> 2-feet thick) and a fast spring thaw is expected. The blasting also helps to protect downstream bridges by helping to break apart large blocks of ice that get carried away with the current during the spring thaw.

Moray, United Kingdom Aerial photographs found during an archival research revealed a residential park was actually constructed over an area that was once an Army WWII era camp. The playground actually overlapped a former trench training area. Concerns that UXO were never screened for or cleared during construction of the park and playground led to widespread fears among the residents.

A contractor was hired to conduct an investigation at the site. To date, only scrap metal has been located, but parents in the area have expressed concern that children have been playing on ground that could house explosive threats. Local officials maintain the safety of the park and no closures or evacuations have taken place.

Nottinghamshire, United Kingdom A leading fracking firm is expected to start drilling on the site of the former Royal Ordnance Factory near Daneshille Lakes in the near future. The factory was one of three built to produce cordite (a form of smokeless propellant designed to replace gunpowder) during WWII. The drilling has sparked concerns from local officials over the potential for UXO at the site. The fracking company believes that the site is safe but opponents reference Environmental Agency (EA) reports that states "most MoD sites that operated during the war were military targets, there is often an issue of unexploded ordnance."

The drilling site, approximately half the size of a soccer field, is an area that was never developed during the construction or use of the ordnance factory. Initial intrusive investigations at the site did not reveal any indicators of UXO (e.g., presence of frag, munitions debris). The company has all the required permits from EA to begin but officials at the EA have "requested soil samples to provide conclusive proof that there are no residual explosives on site."