An excerpt from the 1945 Bomb Disposal Technical Information Bulletin No 53 issued by the Ordnance Bomb Disposal Center, Aberdeen Proving Ground, MD published on 1 June 1945. The excerpt below is from the section of the bulletin titled "New Grenades Found On Luzon."

"The majority of the new type grenades found on Luzon were improvised grenades that could readily have been made up in the field. New types recovered are:"

In response to the UXO Related History Remembered article posted in our December UXO E-Newsletter, NATEODA Historian, LTC Robert E. Leiendecker, USA Retired, provided UXOInfo.com with the following descriptions of the unidentified photos. A special thanks to him for sharing with our readers.

Mr. Leindecker explained, "The first photo is the TM-11/M-1 Thermal Discharger set up for operation. It was designed to discharge the condensers in German Rheinmetall electric bomb fuzes. In the background is the brass steam boiler placed on a portable field stove. It holds water that produces the steam and passes it through the rubber hose you see to the discharge head which is attached by magnets over the fuze head. The steam would penetrate the fuze head through the spaces around the electrical contacts, condense and short out the fuze. The bomb is a German 50 kg HE bomb with screamers, or flutes, attached to the fins, which were often called the Flutes of Jericho. The discharger would work on the (17), (17)A, (17) B, (49) series, 50b (or "Y" fuze), 59, (59)A, 79, 79(A), (89)and (89)B fuzes." 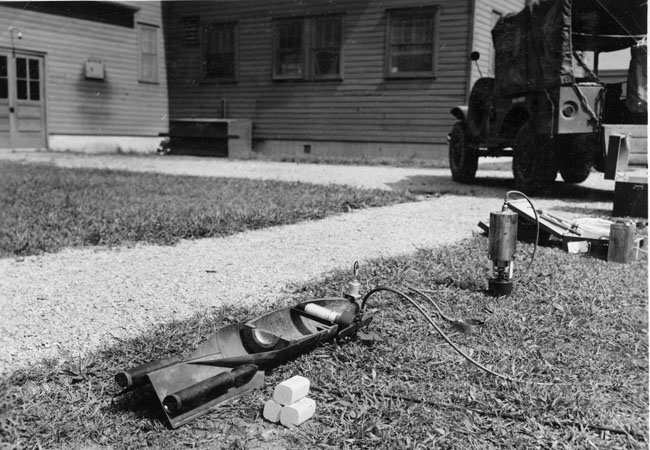 Where are They Now? Some Pre-FUDS Properties Remain a Mystery

Vidal, California We know that clearance of WWII munitions in the United States began as early as 1946, but there remains the question of what became of some properties slated for these pre-FUDS operations. One such location is the Spillane Property in Vidal, CA, encountered in a search of early UXO sites at the National Archives II in College Park, MD.

In a letter found there by researchers to the South Pacific Division Engineer, dated 6 June 1947, 1st. Lt. CR Joseph Sainato of the Bomb &Shell Disposal Team reported the completion of the clearance of 120 acres in a week-long operation. It stated that the land was inspected for land mines and "other dangerous objects" by two-man teams using three detectors at a total cost of $762.

Screening resulted in the discovery of four, fused M1 practice, anti-tank mines filled with black powder and red phosphorus. The mines were disposed of "by placing a large charge of Composition C-3 on them." The letter concluded that the property was now, "free from explosives for the purpose of grazing and cultivation."

Research at the National Archives II in College Park, MD provides an interesting insight as to the efforts of the U.S. Army at the end of WWII in the clean-up efforts on former training ranges. In a series of letters generated in April of 1945, the US Army Chief of Engineers established three specialized Bomb and Shell Disposal Squads to be trained in the detection, location and disposal of military munitions on various training installations that were used during the War. Initial training would be conducted at the Engineer School at Fort Belvoir, VA with follow-on training at the Ordnance School at Aberdeen Proving Grounds, MD.

Three squads were formed, consisting of one officer and six enlisted. Records indicate that the detachments were organized as the 9800th Technical Support Units Detachments 6th, 7th, and the 14th. Historical records of the 14th recovered from the National Archives provide an accurate historical listing of the actions took place from 1946 to 1948. Documents include individual reports of clearance operations conducted, inventories of munitions recovered, and destroyed maps and photographs of work conducted.

Among the inventory lists of recovered/destroyed munitions include the following for Camp Claiborne, Louisiana in 1946:

A detailed written record of the methodology that was utilized during the range operations indicates that the methods and procedures that were used in 1946 involved the use of German POW's as sweepers. Today the USACE FUDS Program relies on the use of civilian UXO contractors. 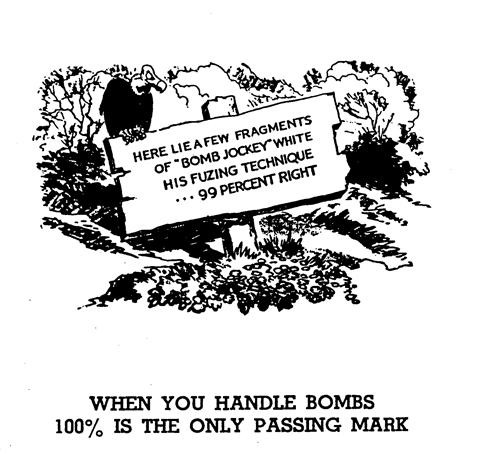 Below the image read. 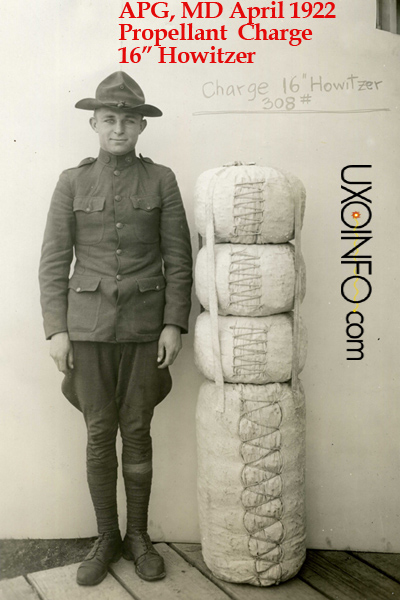 The U.S. military has been concerned over the potential hazards caused by UXO dating back to when explosives and ordnance were first developed. The awareness of UXO issues greatly increased following the end of WWII as significant numbers of training ranges were closed and the properties were transferred outside of the War Department. Evidence of interest in technologies to detect and recover UXO during this time frame is highlighted in a letter found in the National Archives (thank you Rick Stauber for the donation) from the Ordnance Department to the Chief of Ordnance within the Army. The letter dated 17 January 1946, which can be viewed using the download link below, requests information on technologies that can be used to detect UXO at practice grenade ranges. The historic letter highlights a concern that "unexploded missiles [grenades] remain under a thin layer of loose earth as a result of nearby explosions".

Posted At : March 5, 2008 1:12 PM | Posted By : Admin
Related Categories: Historical / Classic
The responsibilities of range clearance have been argued for years within the military. Although EOD is certainly qualified to conduct range clearance operations and has at numerous ranges over the decades, EOD has generally maintained the stance that large scale range clearances are not one of their primary responsibilities. A series of memos from April and May 1943 found by a UXOInfo.com reader at the National Archives shows just exactly how far back this position has been voiced by EOD.

Posted At : January 28, 2008 1:42 PM | Posted By : Admin
Related Categories: Historical / Classic
War puts extreme demands on soldiers, sailors, airmen, and Marines. Those demands are even greater for those serving in EOD. Throughout the years, many military units including EOD kept records of their actions, accomplishments, and challenges. A UXOInfo.com reader doing research at the National Archives came across a mini-series of EOD unit records from WWII. Reading these unit histories reminds one of the dangerous and at times unpleasant conditions that EOD units face during war. The unit history records also highlight the extraordinary level of commitment and bravery these soldiers, sailors, airmen, and Marines showed.

Posted At : October 19, 2007 11:26 AM | Posted By : Admin
Related Categories: Historical / Classic
August 21, 1945. 30 U.S. Military personnel were killed when a load of unserviceable fragmentation bombs exploded after being loaded onto a barge for transporting to a designated sea disposal site. Reportedly, the corroded bombs loaded into crates were safely transported by truck to a jetty and exploded shortly after being loaded onto the barge.

The accident sparked a lively debate on which method or delivery vehicle (ship/barge or aircraft) should be used to transport military munitions to sea for disposal. The debate started by a letter written by the father of a Navy Lt that lost his life in the unfortunate incident. In his letter to the War Department Dated October 30, 1945, Mr. King protested the use of ships in the delivery of munitions to be dumped at sea due to the amount of handling necessary to load and transport the munitions out to their final disposal location. He questioned why aircraft bombers were not used as the delivery means to dispose of munitions at sea.