Governors Island formerly served as a recruitment center, supply depot, prison, and supply base where munitions were stored, tested, transported, and used for training and coastal defense. Historical research has cited that munitions may have accidentally fell or been dumped into the waters as vessels were loading and unloading munitions at the piers.

Not Your Typical "Photo Bomb" on the Vineyard

Martha's Vineyard, Massachusetts A MA State Police Bomb Squad carried out a controlled-explosion of a 100-pound photo flash bomb discovered by a USACE crew at Long Point Wildlife Refuge. A US Navy EOD team from Newport, Rhode Island was also on the scene to provide technical support.

Trustees of the Reservation (TTOR) rangers cleared the beach and parking lots of visitors under the direction of State Police. As an added safety precaution, the West Tisbury Fire Department and EMS were on the scene as well for the detonation. 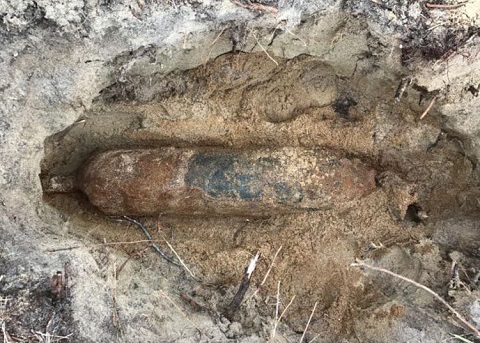 Makua Beach, Hawaii UXO technicians are searching a 10-acre area of Makua Valley for decades-old UXO. Though residents are being warned to stay out of the area during the sweep, many are not heeding the warning.

In a statement from U.S. Army Garrison-Hawaii spokesperson Stefanie Gutierrez, explained that military training activities occurred in an area that includes nearly 900 acres adjacent to Makua Valley from the 1920s to 1990. "That would have been anything from small arms fire, like a rifle bullet to something larger, like artillery or mortar fire".

UXO Clean up of "Holy" Proportions

Castel Gandolfo, Italy The pope's summer residence along with 400 residents of a Rome suburb were evacuated this week as two massive WWII bombs were detonated. The 17th century papal palace at the village of Castel Gandolfo, 15 miles south of central Rome, was closed as nearby residents evacuated in preparation for the detonations of 100 and 130-pound bombs which were discovered on the shores of Lake Albano.

The old WWII bombs and some 4,000 other ammunition items, remnants of the Allied invasion of Italy, were exposed in the lake basin as a result of low water levels. Among the other munition items were some 2,300 hand grenades, 300 mortar bombs and hundreds of bullets.

Rabaul, Papua New Guinea Over 150 military EOD and explosives experts from the Australian Defence Force, New Zealand Defence Force, and Papua New Guinea Defence Force are participating in "Operation Render Safe". The focus of the project is to clear UXO and explosive debris from the surface and shoreline of Rabaul Island, a former major WWII era Japanese Naval Base. Although the Japanese Base was never captured by the Allies, it was heavily bombed during the war. A large percentage of the bombs dropped reportedly did not explode.

Posted At : October 10, 2008 11:22 AM | Posted By : Admin
Related Categories: UXO Cleanup
Amman, Jordan NATO is sponsoring a project to address UXO concerns across the country of Jordan. The first phase of the project (planning and logistics) began last month. Jordan's UXO problem dates back to 1970 when a civil war broke out in the country. UXO is suspected to be scattered throughout the country but authorities believe the bulk of suspected UXO is concentrated in the north around Ajloun and North Shuneh in the Jordan Valley.

Posted At : June 28, 2007 6:40 AM | Posted By : Admin
Related Categories: UXO Cleanup
Thirty-three potential Military Munitions Response Program (MMRP) sites are located on Kirtland AFB over an area of approximately 15,812 acres. Access to most of these sites is controlled by physical factors (signage and inaccessibility), but even with these controls in place there has been occasional military and civilian exposure to UXO items located at the ground surface in the area. Because these sites are slated for future response actions under the MMRP, no attempts had been made previously to remove the UXO items.

During FY06, a Wide Area Assessment (WAA) was conducted at the Kirtland MMRP sites. A field reconnaissance carried out as part of the WAA required the assistance of Explosive Ordnance Disposal (EOD) teams when several UXO items were encountered.

Hazardous munitions items previously present at Kirtland AFB shown in the image below. 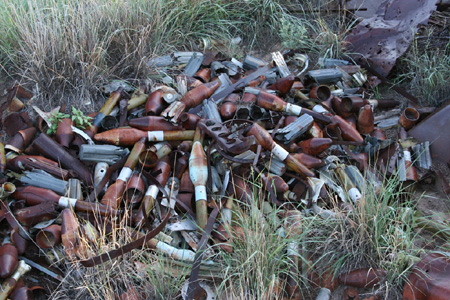 Posted At : May 27, 2007 2:56 PM | Posted By : Admin
Related Categories: UXO Cleanup
Surf City, New Jersey - The U.S. Army Corps of Engineers (USACE) announced the completion of the Time Critical Removal Action (TCRA) of UXO from the surf city beach. Although the TCRA is complete and the beach is open, the USACE and the New Jersey Department of Environmental Protection (NJ DEP) are still warning the public of the potential for UXO.

Posted At : March 28, 2007 7:14 AM | Posted By : Admin
Related Categories: UXO Cleanup
New Jersey Senators, Frank Lautenberg and Robert Menendez are strongly urging the U.S. Army Corps of Engineers (USACE) to complete their search and recovery of UXO on Surf City beach by the start of summer. As reported in the UXO News Wire Service article on 13 March, the USACE lead beach replenishment project resulted in live WWII era fuzes being deposited onto the New Jersey beach.

Posted At : March 27, 2007 6:18 AM | Posted By : Admin
Related Categories: UXO Cleanup
The Government Accountability Office (GAO) released a status report on the cleanup of Vieques Island in Puerto Rico. The report provides an update on the progress made to date of both Installation Restoration Program (IRP) and Military Munitions Response Program (MMRP) sites. The status of the MMRP sites was presented for both the eastern and western sides of the island.