Sequim, Washington Residents in the area of Dungeness Landing Park were startled by three explosions, followed by smoke billowing above the bluffs. They were unaware that members of the 129th EOD Company from Joint Base Lewis-McChord had been called in to destroy several pieces of ordnance that washed ashore on the Dungeness National Wildlife Refuge.

The ordnance, identified by EOD as marine markers, were reportedly fired during military training operations in the area. The EOD response was the second response by EOD in area over the past week. The other call was also to dispose of munitions that washed ashore. 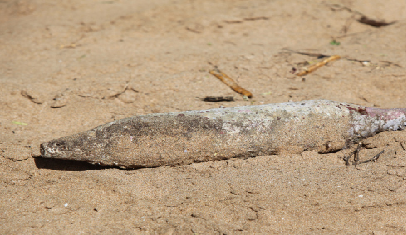 Beach Area Closed Due To UXO

Essex, United Kingdom Authorities closed Essex Beach due to explosives safety concerns from UXO. The decision, made in consultation with the Ministry of Defence (MOD) and the Maritime and Coastguard Agency (MCA), was due to a large number of UXO reports (approximately 50) over the past three months. The newly discovered UXO is reportedly washing ashore from the nearby MOD training area due in part to increasing tides and changing weather patterns in the area. The recent UXO finds include WWI ordnance including mortars.

New signage and fencing is being erected to warn beach goers to stay away from the closed areas until the Royal Navy completes a survey of the area which is expected to take several weeks.

Thatcher Island, Massachusetts Navy EOD technicians safely identified and disposed of a suspected torpedo in waters just off the coast of Thatcher Island, Mass. EOD Mobile Unit (EODMU) 12, Det. Newport was called in after two divers reported the find to the US Coast Guard (USGC).

The ordnance was detonated in place, despite the fact that marine growth on the suspected torpedo precluded positive identification. The USCG requested that the munition be removed to avoid the risk to future recreational divers who could encounter it and also to eliminate the risk of encounter with fishing nets.

Mumbai, India In one of the country's largest recoveries of ammunition in history, hundreds of WWII era explosives were discovered by the Indian Naval Force on the coast of Mumbai. According to reports, approximately 90 unexploded bomb shells, missiles, and live bullets were found incidentally as the Navy was working on widening and deepening the channels of Mumbai Harbor.

Dymchurch, U.K. A 53-year old fisherman walking along the beach searching for bait rooms in the sand at low tide found what appeared to be a munition stuck in the sand. The man called the police but by the time they responded, the tide had come in and the item was no longer visible. Coastguard personnel monitored the beach to ensure that there was no threat to the public.

When low tide came around again, a Royal Navy bomb disposal unit was called in to respond. They identified the item as a pressure vessel from a torpedo. The bomb disposal team carried out a controlled explosion.

Sodus Point, New York a local resident found a marine flare that had washed ashore near the Old Sodus Bay Lighthouse. The flare had a warning label stenciled on the body advising anyone that found the item to contact military and police officials. The resident phoned the police who responded with technical support provided by the Fort Drum EOD team.

Fishermen Net WWII Sea Mine and Head to Shore

Kent, United Kingdom Two fisherman aboard the fishing vessel 'Wayward Lad' pulled up a WWII era sea mine in their nets. The men decided the strap the munition to the boat deck before heading back towards the shore. One the way to shore, they called the Coastguard to report the unusual find. The Coastguard contacted the Royal Navy for technical support. An EOD team was dispatched from Portsmouth to deal with the munition. The EOD team met the fishing vessel a mile from the Isle of Grain.

Anna Maria, Florida A beachcomber looking for sea shells found a grenade several feet from the shore near the Rod and Reel pier. The beachgoer, a veteran of the Afghanistan war, recognized the hazard immediately and called the police. The police responded with technical support from the Manatee County Sheriff's Office Bomb Squad.

The bomb squad safely removed the corroded grenade from the area and transported it off-site for safe disposal. The grenade reportedly dated back to WWII era. Authorities suspect that the grenade came from when Anna Maria Island and Egmont Key was used as an ammunition storage facility.

Peterhead Port, Scotland Fishing trawler Opportinus IV pulled up a munition item in one of their nets. However, rather than immediately reporting the find to authorities, the captain of the vessel decided to strap the munition to the hull of the boat so he could continue fishing. Reportedly, the captain did not feel as though the crew or vessel was in any danger from the munition so he did not see a reason to cut short his trip.

When the vessel returned from its fishing trip a week after discovering the munition, the find was reported to the Peterhead Port Harbor Master's office. The Harbor Master called the police who responded and evacuated the area and workers at the nearby Denholm Seafoods factory.