Cologne, Germany Boat traffic was delayed on the Rhine in the Deutz business district, near Cologne's Hohenzollern Bridge as authorities responded to a WWII era UXO. The item, identified as a 1,100-pound U.S. bomb was found along the river bank.

The nearby rail station and bridge were closed along with the evacuation of nearly 10,000 workers from a 500-meter exclusion zone around the site. 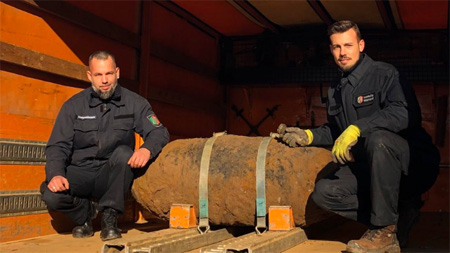 The render safe operation took about 30 minutes allowing the bomb squad to safety transport the bomb for off-site disposal. A member of the responding bomb squad told reporters, "The bomb was dropped from more than 1,000 meters, and if the detonator had been even slightly compressed, then we would have had problems removing it."