Posted At : May 26, 2020 8:08 PM | Posted By : Admin
Related Categories: WWII Era UXO Finds
Vernon, British Columbia, Canada Vernon Royal Canadian Mounted Police (RCMP) were called in after a pair of hikers stumbled upon what was believed to be an unexploded WWII ordnance while walking near a trail in Cosens Bay.

In a statement, Cpl. Tania Finn, media relations officer with the Vernon North Okanagan RCMP, said "Given the paint markings on the device, it is believed to be a live ordnance. We have the area cordoned off in order to ensure the safety of park users while we await the attended of the Canadian Forces Explosive Disposal Unit from Esquimalt." 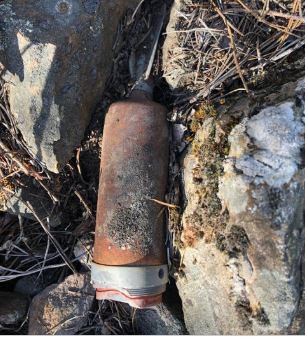 Officers responded to the area to examine the device and send photos to the EOD unit. The immediate area was closed off and other areas of the trail were restricted while awaiting the unit that safely disposed of the device. The Cosens Bay area had at one point been used as a testing range for mortar rounds.

Linking Blogs | 470 Views
Comments
Comments are not allowed for this entry.