Duxford, United Kingdom A 17-year-old using his metal detector for the 2nd time uncovered a WWII landmine in his home. Suspicious that it could be ordnance, he called the police who responded.

The college student explained his find to reporters who covered the story: "I thought what if this is what I think it is.... I continued to dig around it, just to get its overall shape and then when I finally uncovered the surface, I thought that's exactly what I think it is and I called the police. He went on to tell reporters, "they came over and took some photos of it and sent it off to police headquarters, who got a team from Colchester to come up and take a look at it. They were quite alarmed to say the least. We had six police cars in total and they cut off the entire area around here." 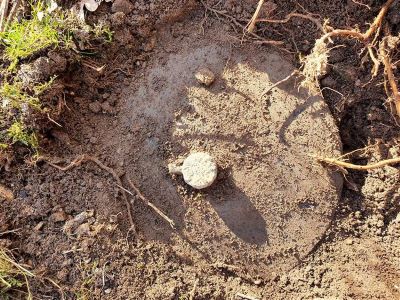 The bomb squad proceeded to x-ray the suspicious item multiple times and after a couple of hours of investigating, the bomb squad identified the item as an inert version of a WWI era German Type 35 anti-tank mine. It turned out to be a British copy made of concrete. The color of the mine was unique in that fact that it was olive green which generally indicates a high explosive (HE) round. This just goes to prove that you can not rely on color coding alone to identify ordnance.

Linking Blogs | 142 Views
Comments
Comments are not allowed for this entry.