Atlanta, Georgia A homeowner saw some debris behind one of his bushes in his back lawn. Upon investigation, the man found a green, metal box inside a pink pillowcase. When he pulled out the metal box for a closer look, he noticed the words stenciled on the box - "cartridges for weapons."

The man notified the police who responded and identified the rounds as linked 40mm rounds for a MK 19 grenade launcher. Police notified the local bomb squad as they evacuated several nearby homes in the area. The bomb squad notified the military and a team from Dobbins Air Reserve Base responded and took possession of the grenades for disposal. Apparently, no evidence was collected from the box such as fingerprints.

Using the lot numbers from the munitions, investigators determined that the armor-piercing (AP) grenades were last accounted for on an ammunition train that left Marine Corps Support Facility in Jacksonville, FL on route to Letterkenny Army Depot, Pennsylvania. The train, operated by CSX, contained 18 connex boxes of munitions each with an orange sign warning "Explosives" on its side.

The 17-day train trip included a route that passed through Atlanta twice. It wasn't until the shipment sat at Letterkenny for 3 days that workers there noticed the missing munitions. Reportedly, armed guards who accompanied the shipment reported nothing. When the train reached Letterkenny, it sat in an unsecured staging area outside the installation with no surveillance. Workers who initially checked in the train failed to verify whether anti-theft seals on each container were intact. An inspector didn't check the seals the next day either, later telling investigators that it was because he couldn't see them. Yet another day passed before workers noticed the broken seals.

The first worker who saw the busted wooden framing used to hold pallets together thought it broke in transit. He then noticed a metal strap that holds each canister snugly to the wood was also cut with one box missing. Workers unpacked the entire container to see whether anything else was stolen, disposing of debris. For investigators, that meant the crime scene near loading dock X-11-G was contaminated beyond repair.

Military investigators would conclude that no one checked the seals in the weeks after the train departed Blount Island. The Pentagon's inspector general wrote that the disappearing grenades "further emphasized the lack of proper security for rail shipments" of military arms, explosives and ammunition. CSX said in a statement that required security protocols were followed during the shipment and that "no seal exceptions were identified while the container was in our possession."

Although the metal box was accounted for, investigators are still looking into the matter as the canister initially contained 32 40mm linked projectiles but only 30 were in the box, leaving two rounds unaccounted for. 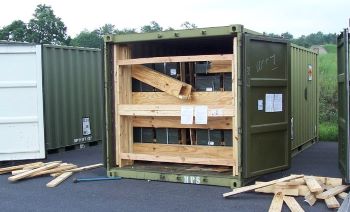 Linking Blogs | 1030 Views
Comments
Comments are not allowed for this entry.