Goole, England A UXO found on the building site of a new housing development forced the evacuation of eight homes and the closure of portions of roadway M62, according to Humberside Police. EOD were called following the discovery of the 500-lb WWII device and confirmed it was live.

Road closure were set up on both east and westbound lanes of the M62 to allow the team to prepare for detonation of the device.

A no-fly zone above the area was also imposed. People living or staying in the wider immediate area were asked to stay indoors, and businesses within the cordoned area were closed until the bomb could be rendered safe. The find also led to the cancellation of Goole's park run which had been rescheduled following months of being placed on hold for COVID restrictions. 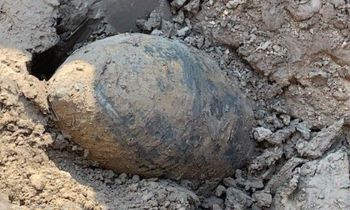 In a statement, officials said, "Colleagues from the Explosive Ordnance Disposal team successfully and safely detonated a 500-lb unexploded WWII bomb, found on the outskirts of Goole. The no-fly zone above the location has also been lifted and it is now safe for businesses to reopen and the public to leave their homes. On behalf of the Humberside Emergency Taskforce, we'd like to thank the members of the public, particularly those that had to be evacuated for safety, for staying clear of the cordon and allowing the team to bring this operation to a safe conclusion. Humberside Police would like to take this opportunity to thank all partners involved in the incident for their swift, effective leadership, and the Explosive Ordnance Disposal team for their efficient, safe detonation."

Linking Blogs | 2390 Views
Comments
Comments are not allowed for this entry.