Understanding the ordnance deployment processes gives you an appreciation of how UXO originates. The information can becomes important when characterizing ranges because the location of potential UXO falls within the specifications and limits of the ordnance deployment process. For example if you know the position of a mortar firing point and you know what types of mortars were authorized to be used there you can determine the surface danger zone (SDZ) or range fan of the weapon which can then be used a guide to determine where UXO may exist on a range. This method of range characterization is not an exact science because it requires detailed records of ordnance expenditures and range usage which is rare on most ranges. This range characterization approach augments or guides on-site ground truth data.

Before ordnance deployment methods are discussed definitions are needed for weaponeering and a weaponeer.

Weaponeering is "the process of determining the quantity of a specific type of lethal or non-lethal weapon required to achieve a specific level of damage to a given target considering target vulnerability, weapon effect, munition delivery accuracy, damage criteria, probability of kill, and weapon reliability."

A weaponeer is "a professional tasked to objectively weigh the relative effects of different munitions against a specific target."

The first deployment method discussed is air to surface weapons delivery for aircraft released, unguided, free fall weapons deliveries as illustrated in the figure below.

Important considerations for an air to surface delivery include a target aimpoint, weapon impact point, weapon function point and a release point. The release point is a point in space defined by the sightline at release (slant range line from the aircraft to the aimpoint) and the angle of the sightline with the horizontal surface of the earth. In some cases this point will lie on an arc of possible release points about the aimpoint, though in reality a variety of factors will dictate a certain attack axis and thus limit the size of this arc.

Some air to surface ordnance have features to restrict their free fall speed to allow the deploying aircraft enough time to get out of the effectiveness or danger area of the weapon being deployed. Common features for bombs include parachutes or large folding fins commonly referred to as snake eye fins. 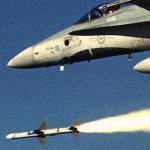 Air deployed ordnance can also include propelled and guided weapons that have features to propel the ordnance and/or control the direction and impact point of the weapon.

Common propelled air to surface ordnance include rockets and missiles. Missiles are essentially rockets which are guided and can be used against targets both on the ground or in the air depending upon the particular weapon design and purpose. Bombs can also have guidance features which control the flight pattern on the weapon. Guided bombs are sometimes referred to as Guided Bomb Units or GBUs. Guidance systems can be based on technologies such as laser and infrared designs. Explaining the functionality of these systems is beyond the scope of this page but for UXO purposes the field personnel must be able to identify ordnance in the field. For more details see the ordnance categories page.